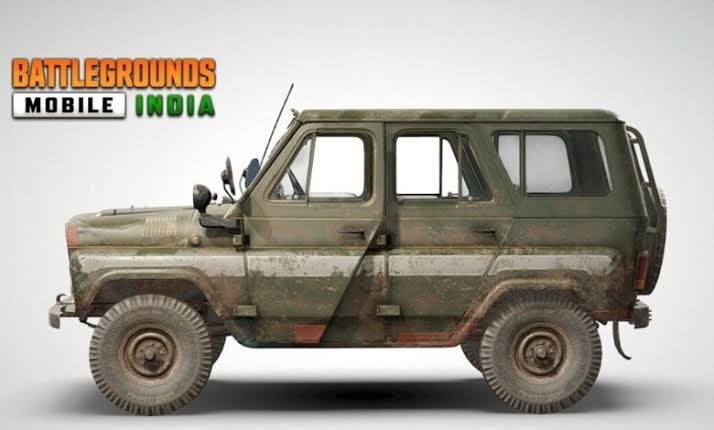 Developers Krafton have released yet another new teaser trailer on 4th of June, 2021 which confirms the addition of the off-road vehicle named UAZ, For Battlegrounds Mobile India, This vehicle has previously featured in both PUBG Mobile and PUBG. Krafton came out with this announcement just a day after Battlegrounds Mobile India crossed more than 20 Million Pre-registration mark on Google Play Store, Which shows such a positive response from the audience as the game’s launch is yet to be fixed.

One of the previous teaser trailers that were surfed by Battlegrounds Mobile India gave the glimpse of a level 3 Backpack which had created quite the buzz among players, which has now come forward to confirm the arrival of the Soviet UAZ off-road jeep.

As we know, UAZ is an iconic vehicle which was initially featured in PUBG and the PC variant of the mobile game. UAZ is mainly renowned for its endurance and stability on the battlefield, providing users with two big advantages, As the vehicle can be virtually driven on any terrain and is also quite easy to repair if damaged heavily.

The off-road beast is quite a popular choice within the realm of this Battle Royale and preferred by many players when surfing all-around the Map (Erangel).

UAZ vehicle comes with a space for four players with 2000 HP of Health and a top speed of over 116 km/h. This vehicle is very good at stability even at high speeds, But the dicker is that the vehicle runs quite loud, Altering the enemies upto a distance of 125 meters, Fuel efficiency is one of the major issues, Requires a lot to run a vehicle on top speed.

UAZ is gonna be a great addition to the

Battlegrounds Mobile India, As the pre-registration is still going on LIVE, But only for Android users still not for iOS users, As there is no yet any Official statement from Krafton about the availability of the game’s pre-registration.

It is sure that developers had pointed out some changes that are going to be observed in Battlegrounds Mobile India, Still it is tough to say how different or similar this game will be.

Till then stay tuned with us for more details regarding PUBG Mobile and keep visiting us for more information and updates on Esports & more. Have you Pre-registered for Battlegrounds Mobile India & Are you excited for Battleground Mobile India just comment below all your views. That’s it, but what now we all should look about is that you have to ” Stay Home Stay Safe, Wear a Mask when Necessary, Maintain Social Distancing, Use Hand Sanitizers, We will Unite to Fight against this COVID-19, We assure you that we will deliver all new and fresh new articles consistently, just stay at home and check us out we are always there for you. Take care, good bye.